Resistance To The Fur Trade

With fur back in season so is the resistance to it. From raids at farms to sabotage of shops, this autumn has so far been another round of biting back. In the last two months farms imprisoning mink have been closed down in Germany by the Animal Liberation Front (ALF) and found abandoned in Italy by the Animal Liberation Investigation Unit (ALIU), while various shops selling fur have given up the cruel trade.

Since the launch of the West Yorkshire Animal Rights Group (WYARG) in August Best Vintage, Room 7, Accent Clothing and TK Maxx have stopped selling fur and with Daniel Footwear promising to follow suit, focus is now on Next One Leather (the last fur shop in West Yorkshire), by targeting their store and associates (1 | 2 | 3). In the West Midlands, the Western Animal Rights Network (WARN) launched a campaign against Madeleine Ann, ensuing three shops going fur free, with demos lasting under a month (1 | 2 | 3 | Video) after products were eventually sent back to the suppliers, ending their sale of fur products (Video). On the same day Le Scarpe issued a fur-free statement leading to harassment from police and new targets established in Cheltenham, while in the capital protests have escalated as anti-fur activists locked onto the London Fur Company’s stall at the London Fashion Weekend, causing the organisers to ask the company to pack up and leave (Videos: 1 | 2). 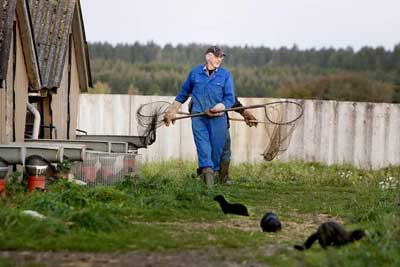 In Italy more than €100,000 worth of damage was caused to a mink farm near Padova by burning five vehicles and sabotaging machinery and buildings, while at a fur farm in Castel di Sangro all the cages were opened liberating 130 mink, all breeding cards destroyed and a pelting room burned down. The farms were previously targeted with a fire destroying a building in 2004 and an ALF raid in 2006.

Furthermore, early this month in the north west of Denmark 6,000 mink near Søndervig and 5,000 mink in Fousing were freed from cages at fur farms, alongside 1,000 mink released in Eksjo, Sweden, in addition to water pipes and equipment damaged causing the farm to announce it’s closure.

The international campaign against fur selling chain MaxMara has also been making headlines with shop locks glued and a bomb hoax in Spain, an explosive attack by ALF Mexico during the global week of action and shops covered in red paint, slogans painted and windows smashed in Italy.